If you have been to the Saturday Farmers’ Market at the Ferry Building, chances are you’ve met the friendly folks at Marshall’s Farm. Their artisanal honey in glass jars, bear-shaped squeeze bottles and rainbow-colored straws are always a huge hit. They have been featured countless times in print and television and their honey has landed on the menu of some of the Bay Area’s finest restaurants including Thomas Keller’s Ad Hoc in Yountville.

So what’s the buzz about Marshall’s Farm?

Marshall’s makes local wildflower honey blended from nectar gathered from seasonal blooms that grow in the San Francisco Bay Area. The taste, texture and color of their honey is as diverse as the blooms from which the nectars and pollens are derived.   On one end is sage honey, which is extremely mild with just a hint of sage and on the other is blackberry honey, which is rich, complex and very sweet.

Beekeeper and owner Spencer Marshall and his wife, Helene, got in the bee business back in 1993. Their honey farm is in American Canyon, a small town around 40 miles north of the Golden Gate. They offer tours of the farm in the weekends and private tours during the week.  So we decided to check out the farm one afternoon and find out the buzz about their bees for ourselves. 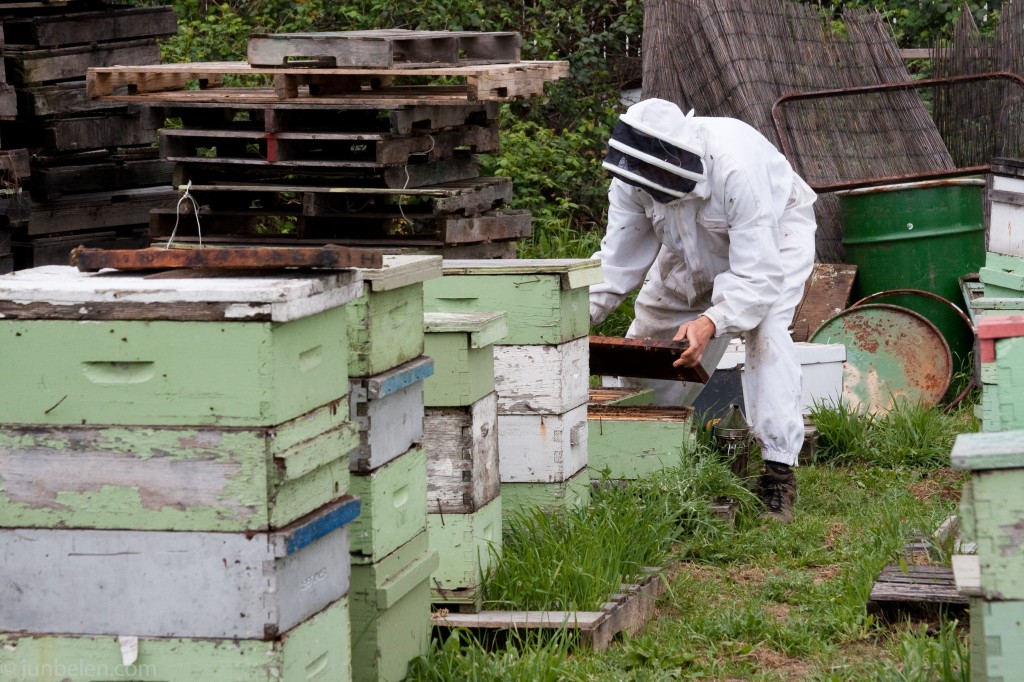 As we pulled in the driveway, we were a little surprised not to find any fields of wildflowers or fruit trees nearby.  We quickly learned that the bees are transported to various locations in Marin, Sonoma, Napa, Solano, Contra Costa, Alameda, and San Francisco where the seasonal blooms grow.  Different flowers like eucalyptus, acacia, thistle, blackberry and wildflowers bloom at different times of the year in different locations.  Marshall chooses locations in the Bay Area that support just a few colonies but have blooms that produce excellent tasting honey.

Once transported to a particular location, like an almond orchard for instance, the worker bees do what they do best: they pollinate the blossoms and produce honey for their colonies. The colonies are housed in what are called honey supers or boxes. Each super holds 9 frames, which the bees fill with honey. Bees actually produce honey in quite an abundance that it’s far more than what they need. The excess is what gets harvested.

The harvest is then brought back to the farm where the honey is extracted and bottled by hand. Wax that is separated from the honey is then made into beeswax.

The best part of the tour — of course, next to the honey and food pairings toward the end — was when we peeked inside the supers to check out the bees. I have never seen a hive before so it was pretty neat to see the bees up close. It was also a treat to tag along Rokas Armonas, the farm’s other beekeeper while he worked in the farm. Donned in beekeeper’s veils, we learned how to smoke the supers using a smoker (the smoke apparently triggers a response in the bees to abandon their hive because of a potential fire) and learned how to spot the queen.

The tour was a lot of fun and very informative. Learning that a worker bee produces a meager twelfth of a teaspoon of honey in her entire lifetime definitely made me more appreciative of how this delicious honey ended up in my plate.

To get information about the farm tours as well as their Farmers’ Market schedule, check out their website at MarshallsFarmHoney.com.