How to Make the Best Brioche Bread Pudding (Tartine Recipe)

I can probably spend an entire day at Tartine. I’ll start the day with a cup of coffee, a croissant, and the morning paper. Then I’ll power up my macbook and do a little work, granted I don’t get too distracted by the Mission hipsters passing by. For lunch, I’ll have some pressed prosciutto and provolone, a side of greens and a bottle of sparkling water. Then I’ll dive into Tatiana de Rosnay, indulge in another cup of coffee, and satisfy my sweet tooth (once again) with Tartine’s brioche bread pudding. But, seriously, I really couldn’t spend an entire day at Tartine. The angry mob waiting for a table would constantly stare at me and my plate, waiting for me to pick up my crumbs, get up and leave.

A list of things I love about the city will not be complete without the bakery on the corner of 18th and Guerrero. Back in December, I featured Tartine’s brioche bread pudding in my list of my 12 favorite round sweet treats in the city. This could very well be the best I’ve ever had. I love its milky moistness. Its rich custard and light caramel flavors. In hindsight, I could have populated that list solely with just Tartine treats: morning buns, frangipane croissants and eclairs to name a few.

As part of the festivities leading to Jun-Blog’s first year, I made Tartine’s brioche bread pudding, thanks to Pastry Chefs Elisabeth Prueitt and Chad Robertson and their wonderful Tartine cookbook. And many thanks to Alexandra’s Kitchen for documenting her experiences making the pudding on her gorgeous blog. Her notes about the Tartine recipe proved invaluable.

“I was shocked by how much more custard there was in my pan than bread, but I trusted the recipe and went with it. That is the key! The bread soaks up all the custard. The key to producing a moist bread pudding is to not crowd the pan with bread.” – Alexandra’s Kitchen

I, too, was shocked. I had 6 slices of brioche bread in a baking pan and a huge bowl of custard. How could I possibly fit this much custard in that tiny pan.  But as soon as I poured the custard in the pan and the bread eagerly soaked the milky-eggy mixture, I soon felt more confident that I was doing the right thing.  Sticking to the bread-to-custard ratio definitely gave a satisfyingly moist bread pudding.  Also, the cookbook makes a clear point to never crowd the bread slices in the pan.  When a bread pudding is dry, crowding is usually the cause.

The recipe suggests using a 9×5-inch glass loaf pan.  But I, like Alexandra’s Kitchen, used an 8×8 glass baking pan that worked perfectly fine.  I did not make my own brioche, which may end up as a future post after I muster enough courage to make it, and instead used loaves of brioche purchased from Whole Foods.  The cookbook notes that the recipe works equally well with croissants, chocolate-filled croissants, challah or panettone.

The cookbook did not mention any fruit being baked with the bread pudding but one thing I love about Tartine’s is the delicious seasonal fruit they top it with, like apples, pears, peaches, and berries.  Again, thanks to Alexandra’s Kitchen, I confirmed that Tartine indeed bakes the bread pudding without any fruit but instead warms seasonal fruits in a caramel sauce and uses it as a topping.

“Moreover, when the busy bees in the bakery remove the pans of bread pudding from the oven, they poke holes in it to let steam out and to create space, and then they pour the warm fruit in caramel sauce over top. Brilliant!” – Alexandra’s Kitchen

Of course, I got too excited after I saw my own bread pudding fresh out of the oven that I forgot about the “poking” step. I ended up simply pouring the warm fruit-caramel mixture on top of the bread pudding, which turned out to be fantastic. 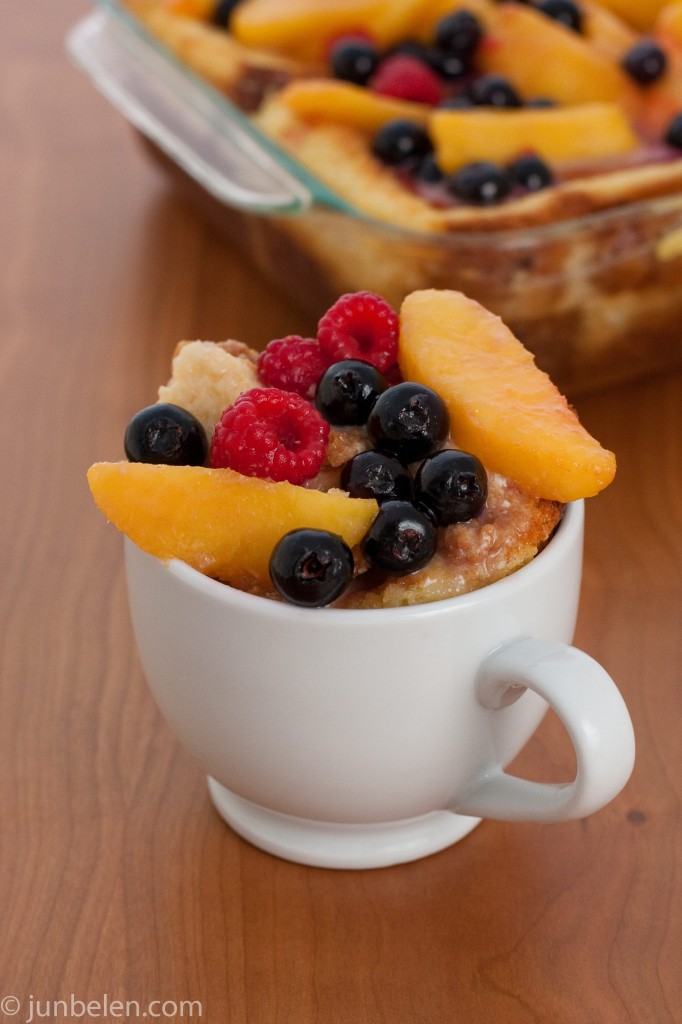 Preheat the oven to 350 degrees.

Butter a 9×5-inch glass loaf pan [or an 8×8-inch glass baking pan, which worked perfectly fine].  Arrange the brioche slices on a baking sheet. Place in the oven until lightly toasted. Remove from the oven and set aside to cool. 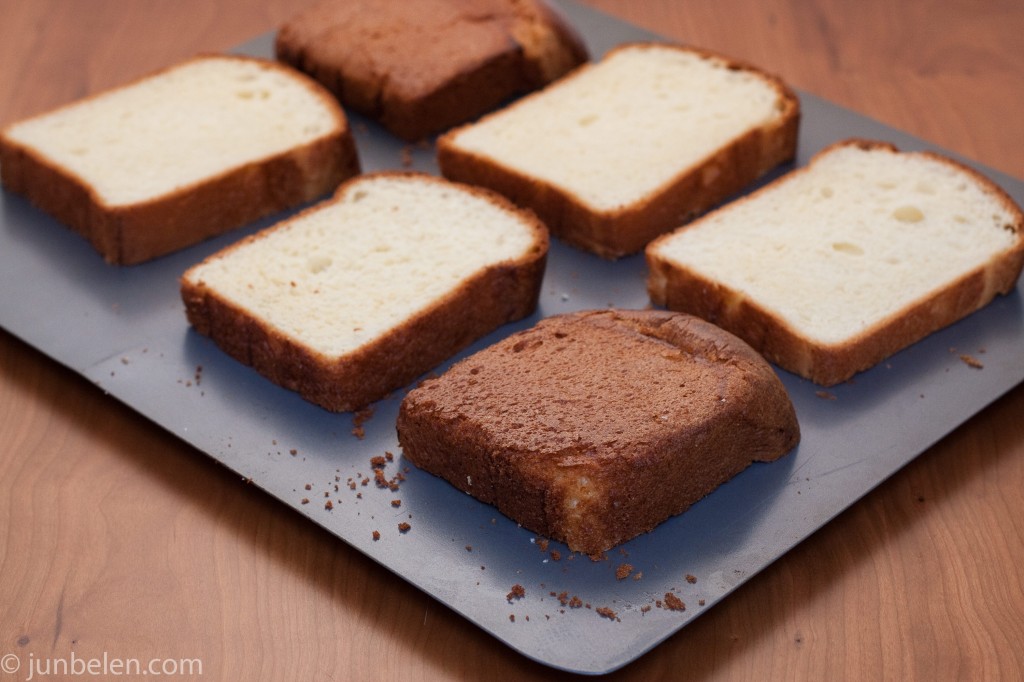 Place the toasted bread slices in the prepared loaf pan, cutting the slices to fit as needed. Pour the custard evenly over the bread, filling the dish to the top. You may not be able to add all of the custard at this point. Let the mixture sit for 10 minutes, so that the bread can absorb the custard. 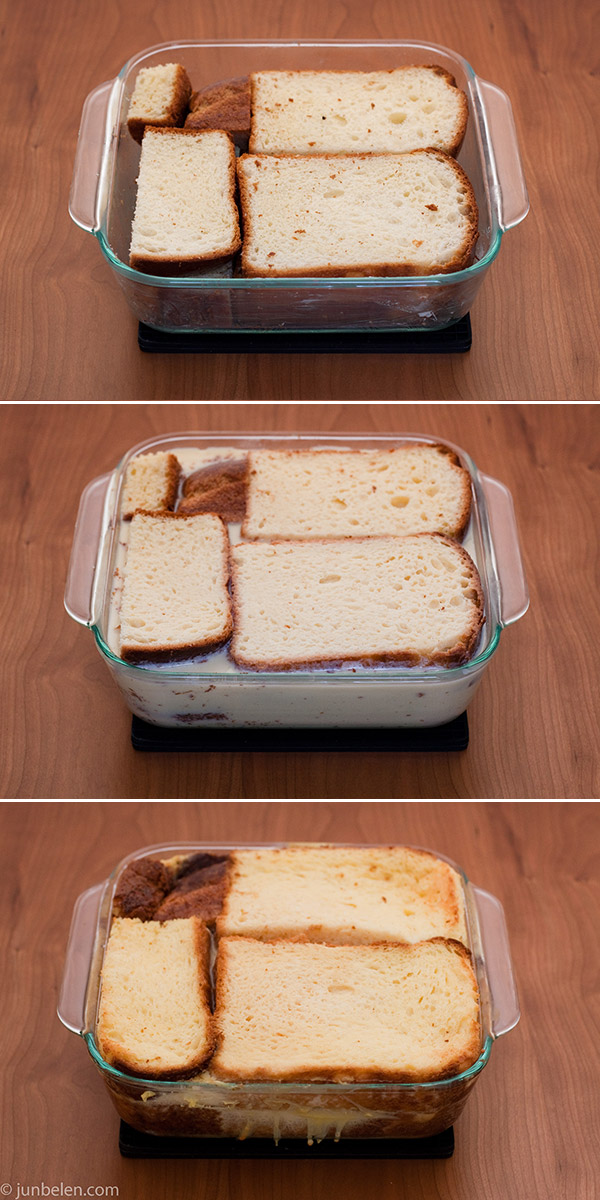 Just before baking, top off the dish with more of [leftover] custard if the previous addition has been completely absorbed. Cover the dish with aluminum foil, place in the oven, and bake the pudding for about 1 hour. To test for doneness, uncover the dish, slip a knife into the center, and push the bread aside. If the custard is still very liquid, re-cover the dish and return the pudding to the oven for another 10 minutes. If only a little liquid remains, the pudding is ready to come out of the oven. The custard will continue to cook after it is removed from the oven and it will set up as it cools.

Let the pudding cool for about 10 minutes before serving. You can serve the bread pudding by slicing it and removing each slice with an offset spatula, or by scooping it out with a serving spoon. 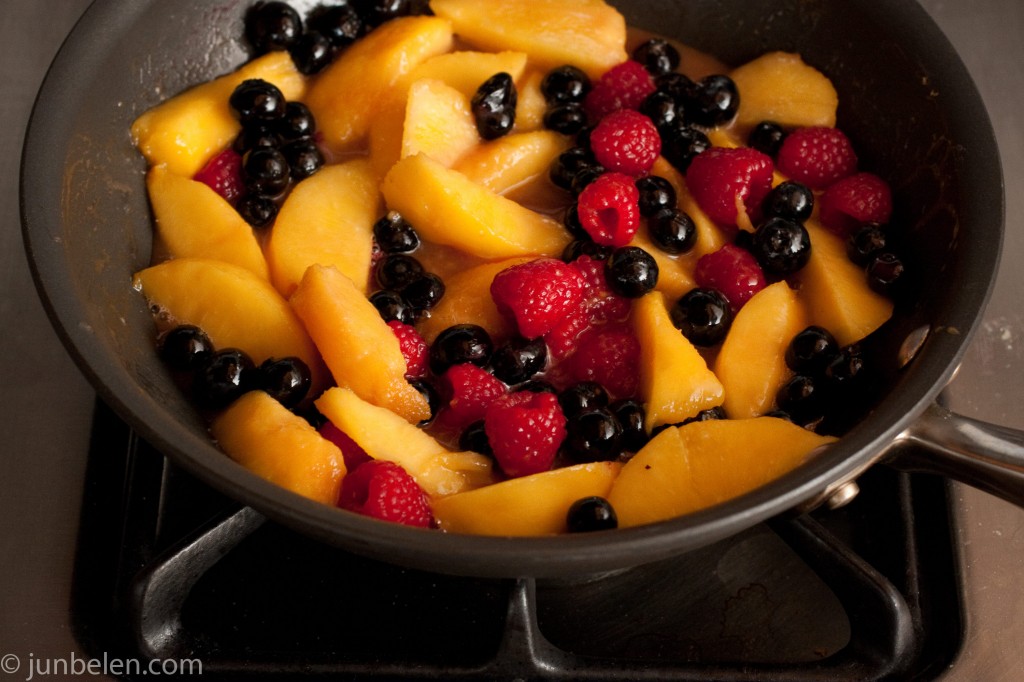 If you have leftover bread pudding, the cookbook suggests chilling it, slicing it, and frying it as you would French toast. 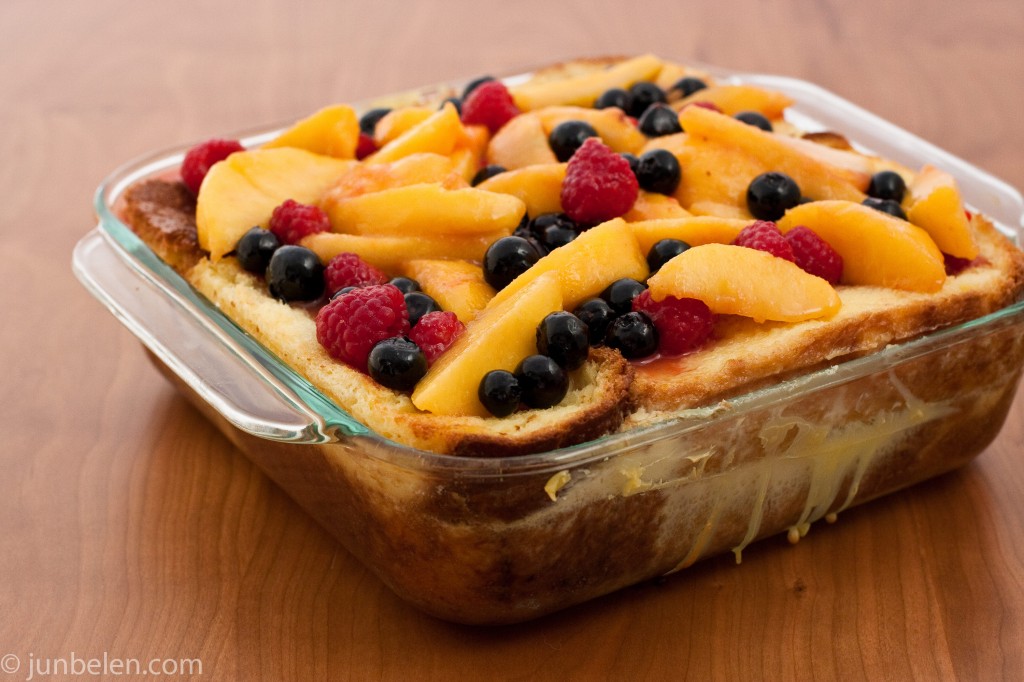 Pour the cream into a small, heavy saucepan. Split the vanilla bean in half lengthwise and use the tip of a sharp knife to scrape the seeds from the pod halves into the cream. Place over medium-high heat and bring to just under a boil, stirring occasionally. Reduce the heat to low to keep the cream warm.

In a medium, heavy saucepan, combine the sugar, water, salt and corn syrup. Use a good-sized pan because the caramel will boil vigorously and the volume will increase dramatically as soon as the hot cream is added. Bring to a boil over medium heat, stirring to dissolve the sugar. Then let the mixture boil, without stirring, until the mixture is amber colored. Watch the sugar mixture carefully as it cooks to avoid burning the sugar. From the time the mixture started to boil, it took over 15 minutes to reach an amber color. Remove from the heat.

The mixture will continue to cook off the heat and become darker, so make sure to have the cream close by. Carefully and slowly add the cream to the sugar syrup. The mixture will boil vigorously at first. Let the mixture simmer down, and then whisk until smooth. Add the lemon juice and let it cool for about 10 minutes.

Cut the butter into 1-inch chunks and add them to the caramel one at a time, whisking constantly after each addition. Then whisk the caramel periodically as it continues to cool.

Pour the caramel sauce in an airtight container such as a glass jar and store in the refrigerator. This will keep for up to a month.