Making Your Kitchen Safe for Your Dogs: 12 Common Foods that are Harmful to Dogs

I always kid around saying Stanford is my loyal kitchen helper.  How could I not — he cleans up the kitchen floor with such unparalleled speed and precision.  As soon as a slice of carrot or a piece of toast lands on the floor, Stanford picks it up within a split second.

But kidding aside, there are so many things in the kitchen that are seriously harmful and even fatal to your pooch.   I worry even more about Stanford because he’s such a big-time prowler. As soon as he hears the rustling of pans and knives in the kitchen he rushes quickly to check out what’s going on. I know sniffing for food is what dogs do but Stanford takes it to a whole different level — he’s a prowler extraordinaire. He was a stray when we rescued him and so we figured that while being out and about in the woods of Utah, fending for himself may have sharpened his prowling instincts really well. We’ve already taken him to the vet a couple of times for an upset tummy. One time it was an olive and the other time it was something that we never really figured out. Seeing Stanford lethargic and totally unexcited about food those couple of times was too heartbreaking.

And so here is a list of common foods that are harmful to our loyal furry friends. Feel free to add anything that comes to mind that I may have missed out. Dogs can generally tolerate small amounts of most of these foods without any problem and the amount that determines toxicity depends on the weight of the dog. But it’s always better to err on the side of caution. I recently came across a story from one of my corgi news groups about a 60-pound, 5-year old male lab mix from Danville, Ohio. The lab ate half a canister of raisins and had to be put to sleep because of acute kidney failure and excessive vomiting and diarrhea. So sad. If the food is meant to go on your dinner plate then it should probably stay there and not end up on your dog’s.

If you suspect your dog or cat has eaten something that is potentially harmful, note the amount ingested and give your veterinarian or the ASPCA Animal Poison Control Center a call at 888.4264435. 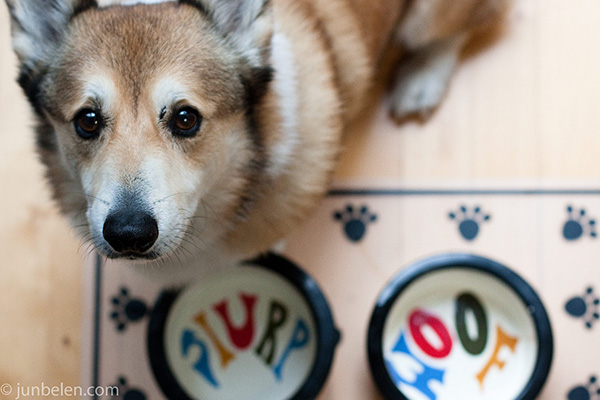 Xylitol is a sugar substitute found in sugar-free cookies, mints and chewing gum, which has been proven highly toxic, even fatal, to dogs.

“It doesn’t take a whole lot (of xylitol), and the effects are so rapid that the window of opportunity to treat the dog is extremely small.” – Dana Farbman, spokeswoman for the Animal Poison Control Center of the American Society for the Prevention of Cruelty to Animals in an interview with USA Today.

Xylitol is used mostly in cookies, candies, cupcakes and other sweets developed for people who have diabetes. It’s more popular outside the United States but it’s now being used more and more in a variety of products such as Jello sugar-free puddings and a wide assortment of sugar-free gums, including Trident, Orbit, Stride, Icebreakers and Altoids.

You have heard about chocolate so many times before but what’s in them that makes them so harmful? Chocolate contains theobromine, a stimulant found in the cocoa bean that can adversely affect the heart and nervous system when ingested in huge amounts. How huge is huge? A small piece of chocolate may not have any effect but gorging on a pound of dark chocolate may result in vomiting, diarrhea, elevated heart rate, and even seizures.

Here is a great link that shows how much chocolate of each kind is potentially harmful based on the weight of your dog.

Caffeine, likewise, is potentially unsafe for dogs. Like theobromine in chocolate, high levels of caffeine can adversely affect the nervous system and so keep your coffee, coffee grounds, coffee beans, caffeinated tea, and caffeinated soda away from your pooch.

A recent study published by the FDA warns that chewing on bones, like ham and chicken bones, may cause serious injury and even death.

“Some people think it’s safe to give dogs large bones, like those from a ham or a roast,” Carmela Stamper, DVM, a veterinarian in the FDA’s Center for Veterinary Medicine, says in an FDA Consumer Update. “Bones are unsafe no matter what their size. Giving your dog a bone may make your pet a candidate for a trip to your veterinarian’s office later, possible emergency surgery, or even death.” – Bill Hendricks WebMD Health News

The study lists ten reasons bones should be tossed in the trash, which include broken teeth, mouth injuries, constipation, and bones being stuck in your dog’s esophagus, windpipe, stomach and intestines. The study also talks about peritonitis, a hard-to-treat bacterial infection of the abdomen, caused by bone fragments poking holes in the dog’s stomach or intestines. Left untreated, peritonitis is fatal.

Grapes and raisins contain an unknown toxin to dogs that can cause severe kidney failure, severe vomiting, diarrhea, and even death.

Avocados contain a toxic fatty acid derivative known as persin, which can cause vomiting, diarrhea, and even death when consumed in large quantities.

Cats are probably more sensitive to onion toxicity than dogs. Onion, garlic, and chives can cause gastrointestinal irritation and could lead to red blood cell damage. Pet food and treats may contain low doses and will not cause any harm but it is best to keep these vegetables away from your dog.

Macadamia nuts can cause macadamia nut toxicosis marked by extreme lethargy and weakness within 12 hours of ingestion.

Yeast dough can rise and cause gas to accumulate in your dog’s digestive system.  This can result in serious gas pains and can possibly even cause the stomach or intestines to rupture. Small pieces of bread are fine as treats as long as the dough is cooked and the yeast has fully risen. However, the ASPCA recommends that bread treats should not constitute more than 5 to 10% of your dog’s caloric intake.

Raw eggs contain an enzyme called avidin that decreases the absorption of a B vitamin called biotin, which can lead to skin and coat problems.

Small amounts of salt are actually safely used to induce vomiting in dogs but salt ingested in large amounts can cause excessive thirst and urination, sodium ion poisoning, and kidney failure.  Signs of too much salt consumption are vomiting, diarrhea, depression, tremors, elevated body temperature, seizures and even death.

Because dogs and cats do not have enough levels of lactase, the enzyme that breaks down lactose in milk, milk and other milk-based products can cause vomiting and severe diarrhea.