How to Make Coconut Pandan Cake

The sweet smell of pandan leaves steeping in a pot of simmering rice is, perhaps, one of my earliest and fondest recollections of food as a child.  My mom would tie the long, narrow, bladelike leaves into a simple knot and add them to steaming rice.  Pandan adds a subtle fragrance and flavor that I find difficult to describe.

My mom would measure rice using an old tin milk can, roughly equivalent to a cup. She would pour the grains in a pot and thoroughly wash them over running water.  She would wash them three times, tossing the water after each wash either in the sink or in a bowl to use the wash later to boil fish. She would fill the pot of rice with water and then dip her hand in the pot, fingers first and fingers straightened. She would use the folds of her fingers as her guide to make sure she added ample amount of water.  She would then bury a knot or two of pandan leaves in the bed of rice.  As soon as the water boiled, she would turn the heat down and let the rice simmer gently.  The fragrance of the pandan leaves would then delightfully permeate the kitchen and the entire house.

Last Saturday, I turned 37 and found myself happily reunited with the endeared pandan.  Filipinos not only love using pandan leaves in cooking rice but in cooking and baking with coconut as well.  I took Thomas Keller’s coconut cake — a simple white cake, very much like an angel food cake — and added pandan flavor to the cake batter and meringue frosting. I let the pandan flavors steep in the coconut milk by adding leaves to the milk as I reduced it.  Into both the cake batter and meringue frosting I added pandan juice that I extracted by whirring leaves and water in a blender.  The cake is beautifully white, despite adding the strikingly green pandan juice, and has a wonderful texture from the lightly toasted coconut.  But the marriage of coconut and pandan flavors is what makes this cake truly delightful.

Pandan leaves are available frozen in most Asian grocery stores.  This cake is best served the day it is made.

Cut the leaves into 2-inch strips.  Place the leaves and water in a blender or food processor and puree for 10 to 20 seconds.  Strain the pandan juice through a cheesecloth or a fine mesh strainer.  Collect the juice in a small bowl and discard the leaves.  The pandan juice has an intense green color that resembles wheatgrass juice.

The juice is added to the cake batter and the meringue frosting to give the distinct pandan flavor. 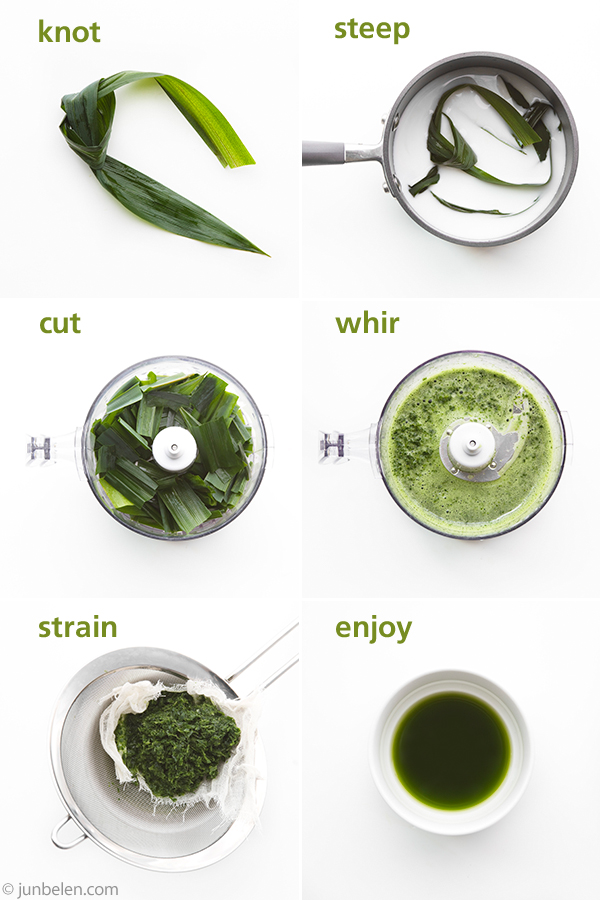 Pour the coconut milk into a small saucepan and whisk to blend. Add two to three pandan leaves tied in a simple knot. Bring to a simmer over medium heat and simmer gently, stirring occasionally, until the milk has reduced to 1 cup.

Meanwhile, prepare an ice bath in a medium bowl and set a small metal bowl on top.

Pour the coconut milk into the small bowl. Once the milk is cool remove from the ice bath and stir in the vanilla and pandan juice.

Preheat the oven to 350 degrees F. Butter two 9-inch round cake pans. Line with parchment paper, butter the parchment, and coat with flour, tapping out the excess.

Sift the cake flour and baking powder together into a bowl. Stir in the salt and set aside.

In the bowl of a stand mixer fitted with the whisk attachment, whip the whites on medium speed. until they begin to froth. With the mixer running, slowly add 3/4 cup of the sugar, then increase the speed to medium-high and continue to whip until medium peaks form .

Remove from the mixer. (If you have only one bowl, transfer the whites to another bowl and wash out the mixer bowl.) Switch to the paddle attachment.

Put the butter in the mixer bowl and beat on medium-low to medium speed to soften, about 1 minute. Scrape down the sides of the bowl with a rubber spatula, add the remaining 1-1/4 cups of sugar, and mix on medium speed until light and creamy, stopping to scrape the sides as needed, 3 to 4 minutes.

From this point, it is important not to overmix the batter. Each addition does not have to be completely incorporated before you add the next; there may be some visible streaks remaining. Add half the dry ingredients to the butter and mix on medium-low to medium speed. Add half of the coconut milk and mix. Add half of the remaining dry mixture, then the remaining milk, and finally the remaining dry mixture. Remove the bowl from the mixer. Scrape down the sides and the bottom of the bowl to incorporate any ingredients that may have settled in the bottom of the bowl, and mix with the spatula so there are no longer any streaks.

Divide the batter evenly between the pans and gently smooth the tops. Bake until a cake tester or wooden skewer inserted in the center comes out clean, 26 to 28 minutes. Let the layers cool on a cooling rack for about 10 minutes, then turn out of the pans and let cool completely.

Meanwhile, spread the coconut on a baking sheet and toast lightly in the oven, 6 to 8 minutes. Transfer to a small bowl and let cool completely.

Lay strips of parchment paper around the edges of a cake stand or serving plate to catch any excess frosting or coconut when you decorate the cake. Position one of the cake layers in the center. Spread a 1/3-inch-thick layer of meringue evenly over the cake layer. Sprinkle light layer of the coconut over the meringue. Top with the second layer. Spread the remaining meringue evenly over the sides and top of the cake. Sprinkle the remaining coconut on the sides and the top. Pull away and discard the pieces of parchment paper.

This cake is best served the day it is made.

Combine 1-1/4 cups of sugar and water in a medium saucepan and heat over medium heat to 220 degrees F, stirring at first to dissolve the sugar. Meanwhile, in the bowl of a stand mixer fitted with the whisk attachment, whip the egg whites on medium speed until they begin to look foamy then gradually add the remaining 2 tablespoons plus 1 teaspoon sugar. Increase the speed to medium-high and whip until the whites form soft peaks. With the mixer running, slowly add the sugar syrup, pouring it down the side of the bowl to avoid the whisk. Add the vanilla and pandan juice and continue to whip until stiff peaks form and the bowl is cool.

It’s best to make meringue right before you need it and to eat it the day it’s made.