She looked the way I remembered her. A petite lady with big, tall hair. Her face beamed with a smile so familiar. Her son, Alvin, towered behind her. Alvin is a dear friend from way back, one of the very few people who knows me through and through.

Everything in their home in Pickering felt strangely familiar. The pile of slippers by the front door. The portraits of the siblings on the walls. The Last Supper that loomed large above the dining table. Everything from the brown, leather couch to the clutter of trinkets next to the television reminded me of their home in Manila, not far from where my family used to live.

“It’s been so long,” I said as I reached out and gave her a hug.

“So how long are you staying here for?” She asked. “Not too long, I’m afraid. Just for the weekend.” I said. Alvin has flown to California to see me so many times but for one reason or another I’d never had the chance to visit his family in Toronto until this past summer.

“I’m happy you’ve finally come for a visit,” she said.

“The last time I saw you was before you moved to Canada twenty years ago.” I said. “Has it been that long?” She said. “Time flies, doesn’t it?”

“Oh, that’s music to her ears,” Alvin said while he flashed a big grin at his mother.

Packed into a three-day weekend, my trip was short but sweet. Alvin took me downtown where we strolled around the streets from the Old City Hall to the Gooderham Building, stopping for a break and a cup of coffee at Saint Lawrence Market. He showed me where he works, where he gets his afternoon Tim Horton’s, and where he takes the train to get home. He took me to the Ontario countryside where we drove up and down the rolling hills, and saw the vineyards and, of course, the famed Falls. He took me to his favorites, La Mesa and Kanto, for a Filipino fix, and introduced me to his friends over a raucous dinner, ever so typical of Filipino gatherings.

But the highlight of my visit came in the morning of my last day. It came as a steaming bowl of sinigang. “I won’t let you fly home without a taste of my cooking,” Alvin’s mother insisted. It was clearly an offer I would be too foolish to refuse. So we sat down to a meal together and feasted on a huge salmon head she simmered in tamarind and miso. “I made it extra sour for you,” she said. “I can tell,” I said as I puckered my lips in delight. We swapped stories about Canada and California, about Filipino celebrities and scandals while a Filipino telenovela played in the background.

“Well, we hope it won’t take another twenty years before we’ll see you again,” she said as she sliced ripe mangoes for dessert.

“With sinigang this good, I don’t think it will,” I said with my mouth full.

Stir in tamarind concentrate and fish sauce. Bring to a boil and simmer until fish is cooked. Add salt to taste. Add mustard greens and simmer for a couple of minutes before serving the soup hot.

1. Salmon heads and salmon belly can also be used to make sinigang. When cooking with heads, remove gills and split them open. Add rice water enough to just cover the heads.

2. Mustasa is mustard greens or gai choy. Romaine lettuce is a good substitute.

3. In place of tamarind concentrate, the popular sinigang mixes available in most Asian stores can be used. Calamansi or lemon juice can be added to make the soup extra sour. 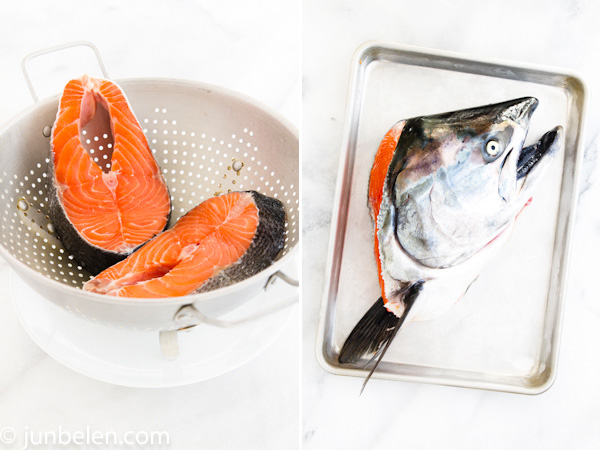