Something was weighing me down. I felt so unenthused, so out of it. The lack of rain was partly to blame. We haven’t had a good soaking in so long and we need rain so pressingly. Everything is parched, my sad self included. Parched and uninspired.

And so I turned to sinigang to lift my spirits. Sinigang is like the swell of sweet scent when I peel citrus. It is like the gush of crisp air when I run in the early morning. It is like rain, glorious rain, after a long dry spell. Sinigang has this effect on me. Stirring but at the same time calming. Comforting, without a doubt. Its familiar asim — its sourness — wakes up my senses. It unclutters my mind.

And so I slurped in delight. I puckered my lips. I peeled shrimp and dipped it in patis, in fish sauce. A jolt of sinigang’s biting but beguiling sourness was all I needed for a jolt of inspiration.

Shrimp is cooked in the shell with its head intact to retain as much of its flavor as possible. With a pair of kitchen shears, cut through the shell along its back starting from its head and ending right before its tail. Remove the black veins with a tip of a paring knife and rinse the shrimp with cold water. Set aside.

Place rice-water, onions, tomatoes, and daikon in a pot. Bring to a boil over medium-high heat. Reduce heat to medium-low and simmer until daikon is almost cooked but still crunchy, about five to seven minutes.

Add shrimp and long beans. Stir in tamarind concentrate and fish sauce. Bring back to a boil and simmer until shrimp is cooked and beans are still bright green. Taste and adjust sourness. In place of tamarind concentrate, the popular sinigang mixes available in most Asian stores can be used. Add salt to taste. 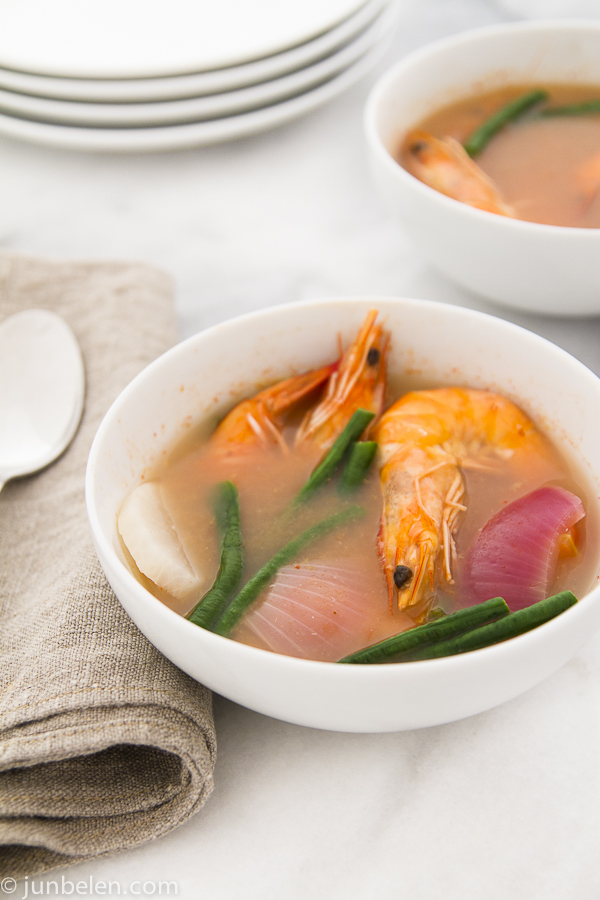