How to Make Bacon Snickerdoodles

Inspired by Kitchenette’s delightful bacon snickerdoodles, I solicited the help of the Joy of Cooking for a basic snickerdoodle recipe and tweaked it a bit to accommodate the addition of tasty, salty bacon.

For the cinnamon-sugar coating

And of course, don’t forget the bacon.  A few strips will do.

In a small bowl, combine the sugar and cinnamon for the coating.

Shape the dough into 1-1/4-inch balls.  It’s a bit sticky so I ended up scooping the dough with a spoon instead of shaping it by hand.  Roll them in the cinnamon-sugar coating, and arrange about 2-3/4 inches apart on the cookie sheets. Place the bacon slices on top of each ball, right in the middle. Gently press down the bacon. This will flatten the dough a bit, but just a tiny bit.  Doing this makes sure that the bacon stays in the middle of the cookie as it bakes.  The first time I tried baking these cookies, I just laid the bacon strips on top of the dough without pressing it down gently. The bacon did not stay in the center and it flowed toward the edge of the cookie as it baked.

Bake one sheet at a time, until the cookies are light golden brown at the edges, 12 to 14 minutes. Let the cookies stand briefly then place them on racks to cool. 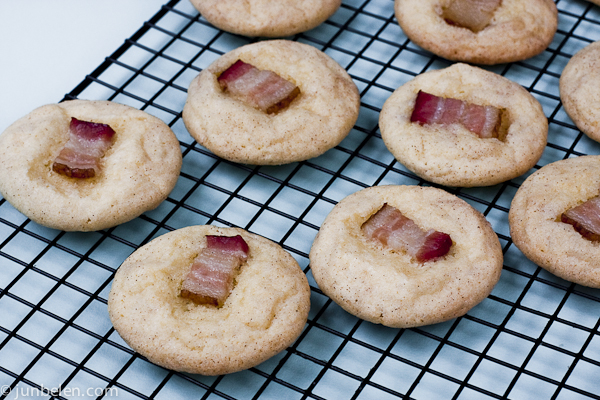