How to Catch and Cook Blue Crabs: Blue Crabbing in the Outer Banks

She was strong.  Unrelenting.  Her tenacity was to be admired.  As soon as she emerged from the murky water in a loud splash that broke the peaceful channel, she held onto the net with her bright orange claws like her life depended on it.  It may sound heartless but her life actually did.

She was my very first blue crab.  Gorgeous blue legs and speckled armor.

Catching her was pure and simple joy. 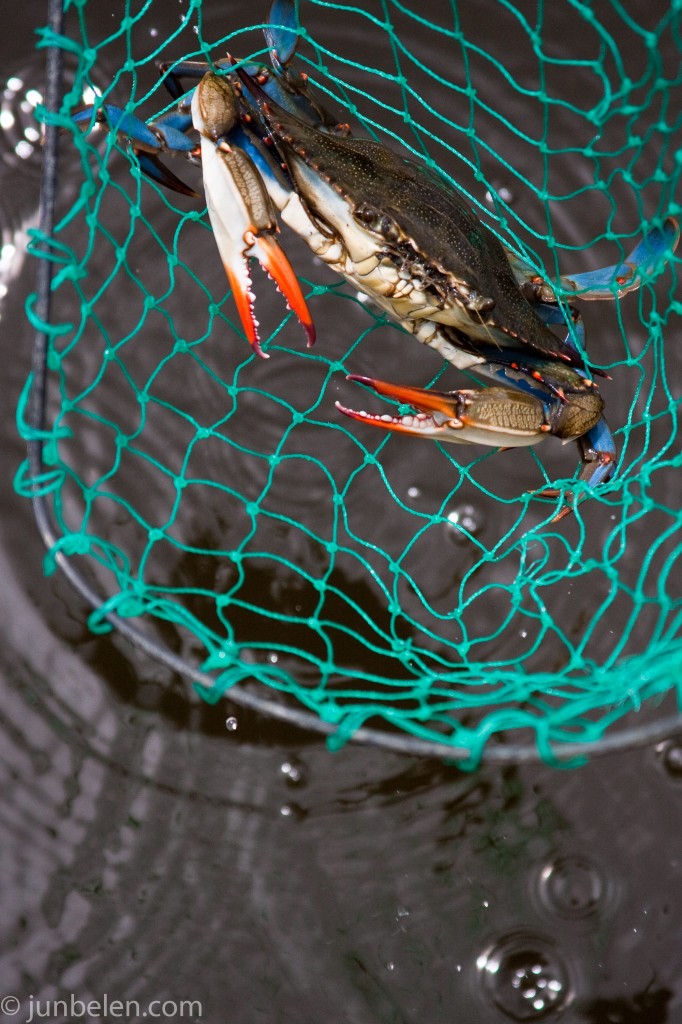 We got the tip on where to crab from two older gentlemen in a bait and tackle shop in Buxton, a town on the southern end of Hatteras Island in the Outer Banks.  They instructed us to drive west, 10 miles or so, to the Channel Bass, an old restaurant that had gone belly up.  They told us to keep an eye out for a small bridge.  The restaurant will be on the left just before the bridge and the channel behind it will be teeming with blue crabs, they promised.  We shopped for our crab gear and loaded everything in our rented Jeep: a dip net with a nylon mesh, a bucket, a bag of ice, a few dry towels, a couple of crab rigs — weighted bait clips tied to the end of a long, sturdy string, and a whole mullet as bait.  We had everything we needed to go blue crabbing.

It was just right after twelve, the heat of the sun pounded down on our sunblock-lathered backs. After I laid everything out on the grassy bank, Dennis filled two empty soda bottles with water and tied the loose end of the crab rig around the bottle’s neck.   He cut the mullet into 2-inch thick pieces and skewered a piece of fish onto the bait clip.  Then he taught me how to crab.  He told me to toss the bait as far out into the water as I can, then steadily hold onto the soda bottle with one hand and the string with the other.  Keep the string taut and wait for the crabs patiently, he said.    He showed me how to gingerly reel in the bait once the crab tugs the string and as soon as the crab is within reach,  he told me to scoop it out of the water with the net as swiftly as I can. 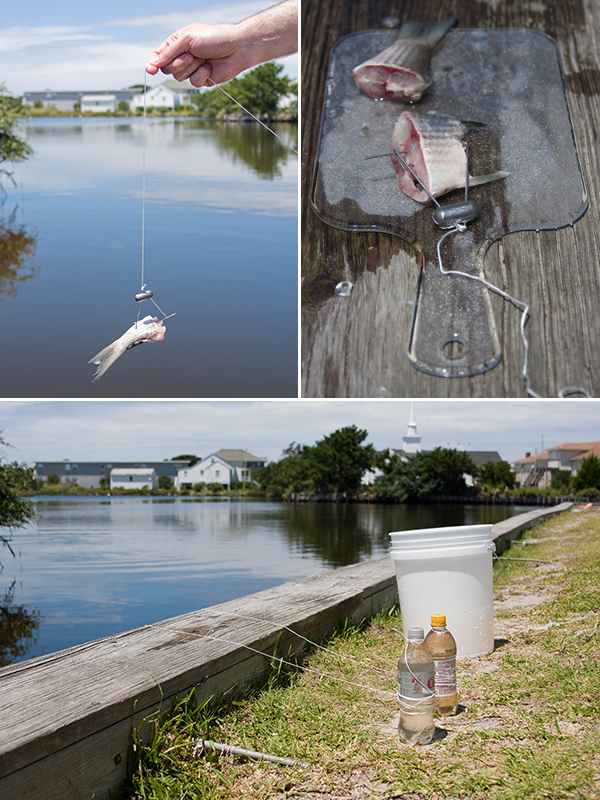 And then it happened. It just happened. I was almost ready to quit when suddenly I felt a strong yank on my crab rig. I carefully pulled the string and wrapped it around the soda bottle.  Gently and slowly.  And before I knew it, there it was — my very first blue crab.  Dennis nimbly grabbed the blue crab with the net while I quickly fired shots with my Canon.  The crab had intensely orange claws, which means it’s a female.  A beautiful female blue crab.  She was quite a catch.

We caught four blue crabs that day and plenty of little ones that had to be tossed back in the water.  We came home with our loot and with plenty of stories to tell.  Dennis boiled the blue crabs in a big pot of water with some salt, Old Bay and vinegar.  East Coast blue crabs are a bit more challenging to eat than the bigger and meatier West Coast Dungeness but the blue crab meat is so much sweeter. No butter needed.

A couple of days later, Dennis and I ventured out once again.  This time we drove over to the Oregon Inlet, the inlet that joins the sound and the ocean and separates two islands: Bodie and Pea.  The bay on the northern tip of Pea Island where the Oregon Inlet Bridge ends is a popular fishing and crabbing spot — a spot that Dennis is very familiar with.  When he was a kid, Dennis spent many summers fishing and crabbing with his dad, mom, and brothers on this bay. And there we were, Dennis and I on that exact same spot, decades after, catching blue crabs. We crabbed on a sandbar in the middle of the bay. I tossed the bait and reeled it in while Dennis scooped the crabs out with the net. One after the other. At the end of the day, we caught twenty-four blue crabs. I just cannot begin to tell you how much we enjoyed that afternoon. It was magical. There is something truly wonderful about catching your own food. It gives you a sense of fulfillment. A deep sense of pride as well as appreciation for the food that nourishes your body and soul.

And there is also something truly wonderful about childhood memories and family traditions. I was standing in the middle of the bay where Dennis stood many years ago as a young kid doing exactly the same thing.

Life is magical that way.

View Blue Crabbing at the Oregon Inlet in a larger map 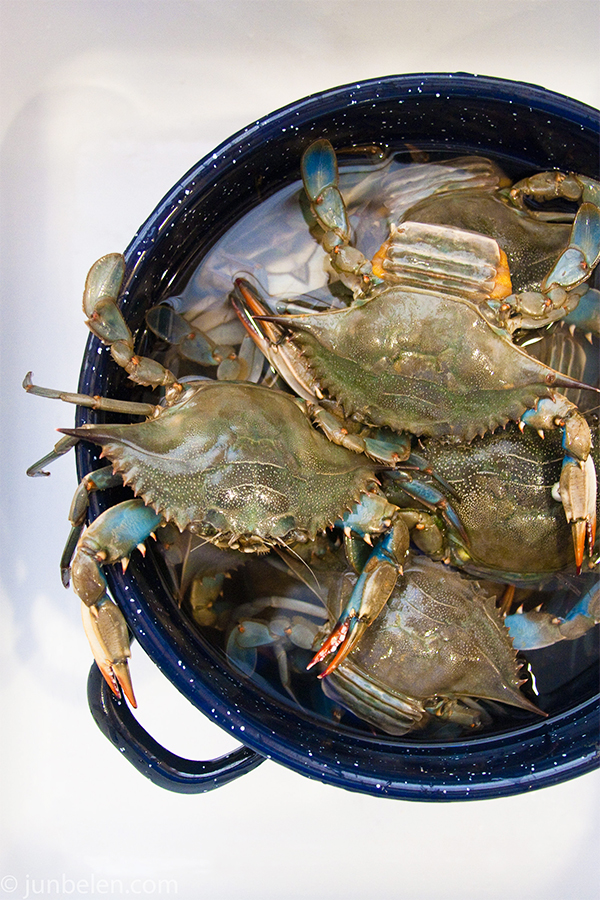 Be very careful handling blue crabs. They are quick and can pinch with their claws. Wear gloves or use tongs when working with them. Scrub the blue crabs clean. In a large pot big enough to cook four to six blue crabs, bring water to a boil. Add the Old Bay, vinegar, and salt. 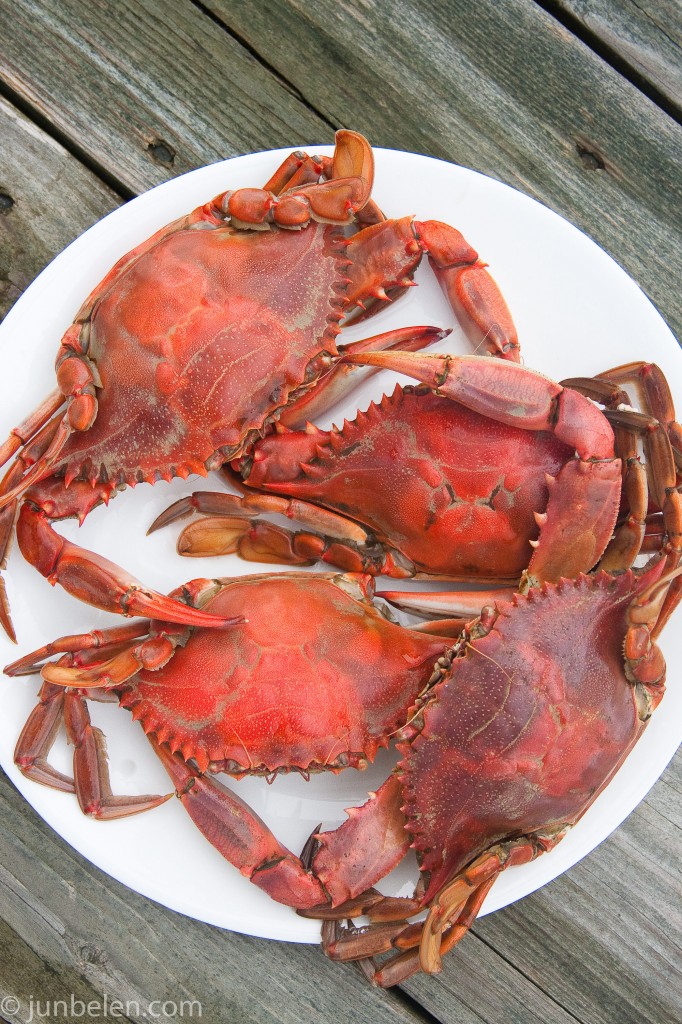