I cannot begin to tell you how excited I am about this piece of good news. I am writing this with a big grin on my face.  A huge grin from ear to ear.  I’m not one for brazen self-promotion but I’m telling you anyway.  I am now a published cookbook photographer.  This is bigger than having my blue crab land on the cover of a Florida magazine.  Infinitely bigger.  My good friend Steven Gdula’s new book, Gobba Gobba Hey, a Gob Cookbook, just came out and the gob photograph on its jacket was taken by yours truly.  It looks pretty darn sharp, if I do say so myself.  A gorgeous photograph to accompany an already gorgeous book.

But hold your horses, I can hear some of you say.  Gobba Gobba what?  Gobs?  What on earth are they?

Steven Gdula is one of the pioneers of San Francisco’s street food movement and the brains behind the gobs of Gobba Gobba Hey, named in honor of the punk rock icon, the Ramones.  A gob is a regional cake-like confection from Pennsylvania where Steven grew up.  It is made of two moist, dense cake domes joined together by a sweet cream cheese filling.

As much as I can easily wolf down a dozen of his classic chocolate and vanilla in one seating, my favorite gob, without question, is his coconut with ube filling.  Yes, ube.  The beloved purple yam.  Steven fondly writes about ube in his book,

“I was at Mitchell’s Ice Cream, a San Francisco institution since 1953, when I spied a beautiful royal purple ice cream and learned that it was made from a yam known as ube.  I immediately wanted to find a way to incorporate this exotic beauty, a beloved mainstay of Filipino cooking, in my gob repertoire.”

Steven debuted his ube gobs in a local street food event that celebrated Filipino cuisine in the spring of 2010.  That was where I met Steven and had a taste of my very first gob.  His coconut with ube filling is a sentimental favorite not only because of its Filipino flavors but because it reminds me of  how a photograph I took and a blog post I wrote were repaid with kindness and friendship.  “I love your work and I want you to photograph my book”.  I can still remember the thrill in Steven’s voice when he broke the good news to me over the phone almost a year ago.  The news came at the most opportune time when cameras kept crashing down.  We all know that hard work and a little luck bring breaks but who knew Pennsylvanian cake sandwiches can bring them, too.

Gobba Gobba Hey, a Gob Cookbook is a collection of 52 recipes and stories that chronicle Steven’s first year of gobbing.  The first cookbook dedicated to gobs is now available in stores and online. 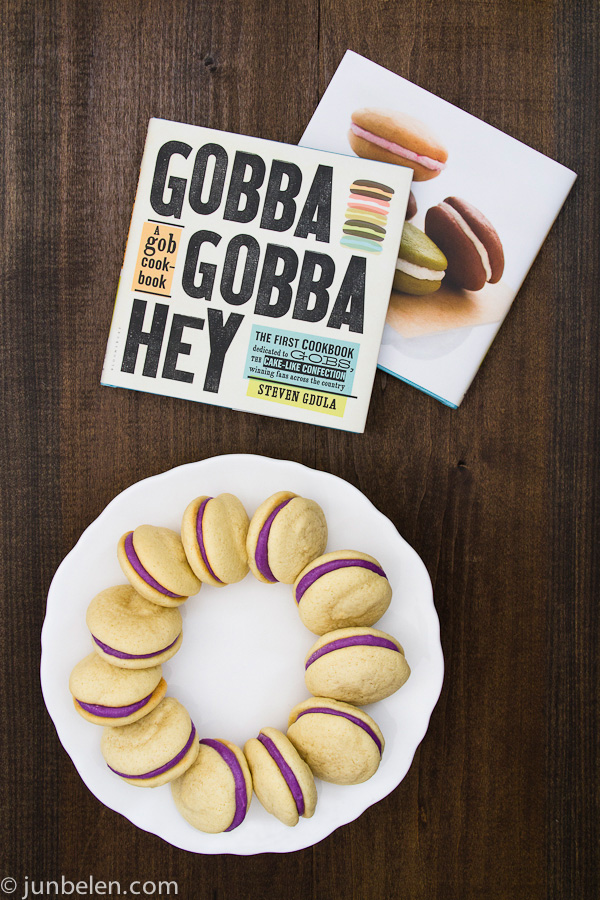 In a large bowl, sift together the flour, baking powder, baking soda, and salt. Whisk the dry ingredients until they’re evenly distributed.

Alternate adding the dry ingredients and the coconut milk to the egg mixture, mixing on medium speed after each addition. Then add the sour cream and mix well.

Using a tablespoon or pastry bag, drop 1-1/2-inch rounds of batter. bake them approximately 8 minutes, or until the gob domes have risen. remove the gobs to a wire rack to cool.

For the ube puree

Defrost the ube according to the package instructions. Cut the defrosted ube into 1-inch cubes, preparing enough to measure 2 cups.

Put the ube, sugar, lemon juice, and 1 cup of water in a saucepan. Bring the liquid to a boil.

Reduce the heat and simmer, stirring occasionally to mash up the ube. When a paste starts to form, remove the pan from the heat and allow the mixture to cool. If the mixture becomes too thick, add more water, one tablespoon at a time.

Add cooled ube mixture to a food processor and carefully puree it. If the mix becomes too starchy, add more water. Reserve the ube puree for the gob filling.

Cream together the butter and cream cheese with a mixer on medium speed.

Add the vanilla, lemon juice, and confectioners’ sugar, and mix on medium. Then add 1/2 cup of ube and beat until the mixture is fluffy; scrape the bowl with a spatula to reincorporate the ingredients if necessary. Taste and add another tablespoon of lemon juice if you like. If the filling looks like it needs more stability, add more ube.

To frost the gobs, flip the baked gob domes over on a cookie sheet and match up pairs of similarly shaped dome. Add 1 tablespoon of filling to the flat side of an overturned dome, then place another dome on top, sandwich-style. Allow the gobs to fully set by refrigerating them on a baking sheet for at least 1 hour. Wrap the gobs in plastic wrap to prevent them from drying out. 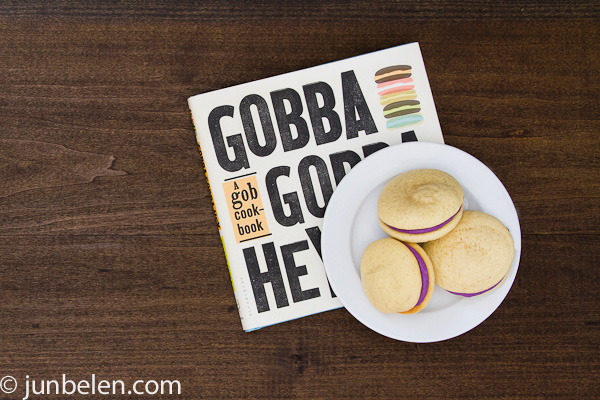