Half a cup of coconut milk for a pound of shrimp.  Roughly.
Use cream instead of milk, when you can.
Devein shrimp but keep heads and shells on.

I skimmed through my mom’s recipe for shrimp in coconut milk once more.  The shrimp had been deveined and cleaned.  Their spiny heads with their jet-black eyes intact.  With a rubber spatula, I stirred the coconut cream in the can before I poured it to a measuring cup.  I dipped my finger for a quick taste and suddenly felt wistful.  A helpless longing for home engulfed me.  A longing for kakang gata [ka-kang gah-tà] freshly pressed from coconut meat freshly grated.

I didn’t grow up with cans of coconut milk and coconut cream.  I grew up with my mom cracking coconuts with a bolo knife, grating the meat with a kudkuran [kood-koo-rahn], and squeezing out the milk with her own hands.   The process is laborious but immensely rewarding.  Extracting coconut milk by hand may seem like an extravagant use of time but it’s the kind of extravagance I earnestly wish I could afford.

The humble kudkuran is a uniquely Filipino kitchen implement used to grate mature coconuts.  It has a serrated round blade shaped like a flat spoon secured to the end of a low wooden bench, about a foot high.  One straddles the bench, holds half shells of coconut firmly with both hands, and grates the meat against the blade with a steady hand-rocking motion.  The fine strands of coconut are collected in a basin.  To extract the thick cream called kakang gata, grated coconut is pressed by hand.  The coconut meat is then soaked briefly in warm water and pressed for a second, and sometimes a third time, to yield thinner milk called gata [gah-tà].

Ginataan [gi-nah-tah-ahn] is the general term for cooking in gata.  Practically anything from fish and shellfish to chicken, pork, and vegetables can be cooked in coconut milk.  The dishes are typically savory like ginataang hipon, shrimp cooked in coconut milk and flavored with funky bagoong, and ginataang langka, a stew of unripe jackfruit in coconut milk cooked with dried, salted fish or tiny dried shrimp called hibe.

Ginataan can also be sweet, which is perfect for dessert or merienda like ginataang mais — golden kernels of corn simmered in coconut milk and ginataang halo-halo — a hodgepodge of fruits and tubers like saba bananas, jackfruits, ube, taro and sweet potatoes all cooked and sweetened in gata.  Tapioca pearls and dough balls called bilo-bilo made of ground sticky rice can also be thrown in the halo-halo mix.  The variations in ginataan, both sweet and savory, are virtually limitless. 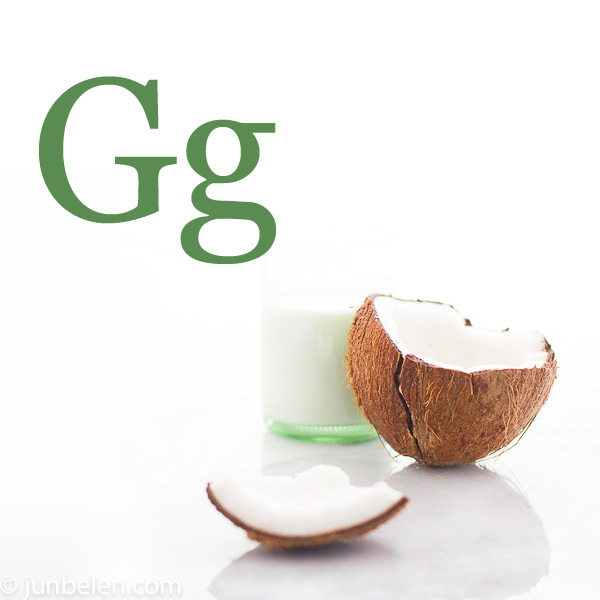 Shrimp is cooked in the shell with its head intact to retain as much of its flavor as possible.  With a pair of kitchen shears, cut through the shell along its back starting from its head and ending right before its tail.  Remove the black veins with a tip of a paring knife and rinse the shrimp with cold water.

Sauté garlic in oil in a large pan over medium-high heat until fragrant, about three minutes.  Add the shrimp paste and shrimp.  Stir-fry until the shrimp just start to turn orange.  Add the coconut cream and Padrón peppers.  Bring to a boil and simmer until the shrimp are just cooked through, about five minutes. 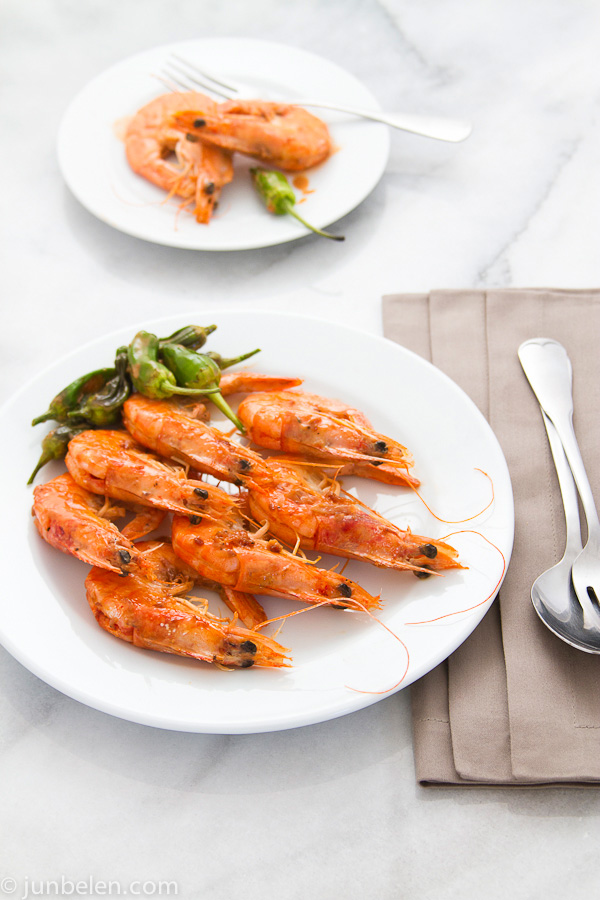