I knew the oil wasn’t hot enough when the fish balls hissed only feebly.  I expected the pool of oil to bubble furiously as soon as I dropped the fish balls in the wok but all I got was a scant sizzle.

I knew I was too impatient.  I waited on pins and needles while the frozen store-bought fish balls thawed in a colander by the sink but I was too anxious to wait any longer.  Too anxious to fry them and drench them in sweet and sour sauce.  Too anxious for seconds.  For more.

You really couldn’t blame me.   The wait had been far too long.  I miss my carefree college days when deep-fried fish balls skewered into bamboo sticks was a staple.  Hey, wait. Carefree? Who am I kidding?  I was a bookish Engineering student back then who took the Laws of Thermodynamics seriously and burned the midnight oil relentlessly.   My regular dose of fish balls with friends in the late afternoons before the long jeepney ride home kept me sane for the most part during those tough college years.  Fish balls along with fast food fried chicken and the famous silog plates at the University Shopping Center nourished me throughout those years.

I still remember very well the fish ball cart on campus and the cheerful old man who fried fish balls all his life.  We never knew his name but fondly called him Manong [Mah-nong], an Ilokano term of endearment, which means older brother. Manong always parked his cart next to the evergreen lawn, under the century-old acacia tree right outside the hallowed Melchor Hall.  The sage-colored wooden cart, like most other, was fitted with a deep wok called kawali that sat on a gas burner.  Attached along its rim were pieces of twisted wire that you pushed down against when you threaded deep-fried fish balls into a stick.

Next to the hot kawali was a snug compartment that held a dingy tin can packed with bamboo sticks and a row of tall coffee jars reused to hold dipping sauces:  sweet and sour, and vinegar infused with fiery siling labuyo, which I obviously avoided.  The cart had a flimsy roof that provided meager shelter from the rain and the sun.

Manong’s fish ball cart was perpetually abuzz.  There would always be a swarm of folks around his cart in the afternoons, just in time for merienda.  Young and old alike traded quips and exchanged stories while they took turns dunking their fish balls in their favorite sauce.  Friendships were forged, however fleeting, over deep-fried fish balls. 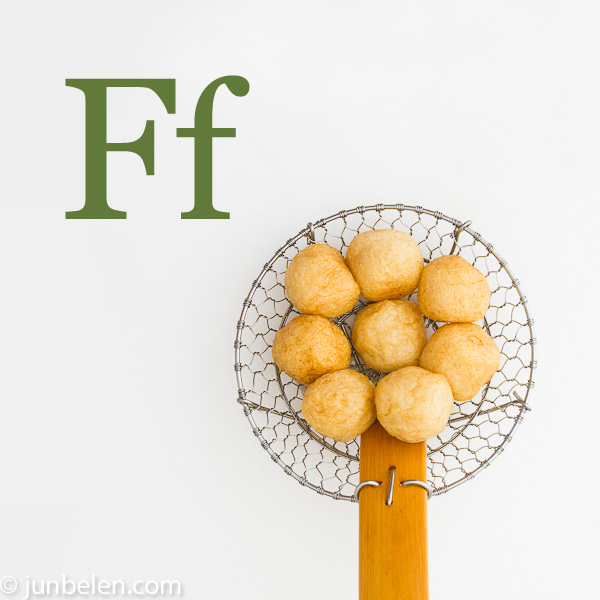 Before long, the fish balls sizzled as I slid them down the side of my wok.  The heat of the oil seared their skin to a delicious golden crisp.  I gingerly fished them with my trusted spider, skewered them into bamboo sticks, and dipped them in my homemade sweet and sour sauce.  They were good but not as good as the ones back home.  But these would do, I thought.  These would do.

The humble fish balls-on-a-stick is the quintessential Filipino street food.  Its roots are clearly Chinese.  Its ingredients?  Don’t ask me what they are made of.  I have shunned away from this probing question.  Pollock, maybe. Cod. Perhaps, the Filipino favorite milkfish.  Who knows.  One thing’s for sure.  Deep-fried fish balls drenched in sweet and sour sauce are truly Filipino comfort food on a stick.

Combine vinegar, sugar, soy sauce, and water in a saucepan and bring to a boil.  Whisk the cornstarch in the sauce and let it simmer until it thickens, around five minutes. The sauce will keep in the refrigerator for up to two weeks.

When frying store-bought fish, shrimp, and squid balls, make sure that they have been completely thawed and are at room temperature.  Make sure, too, that the oil is sufficiently hot, around 180 degrees F.  Fry the fish balls in small batches until golden brown, around a minute or two. 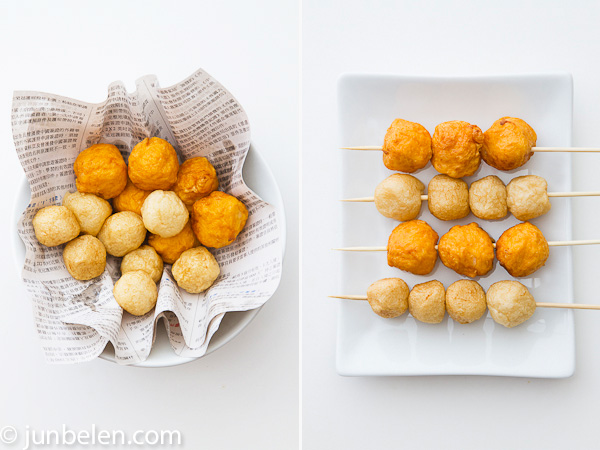 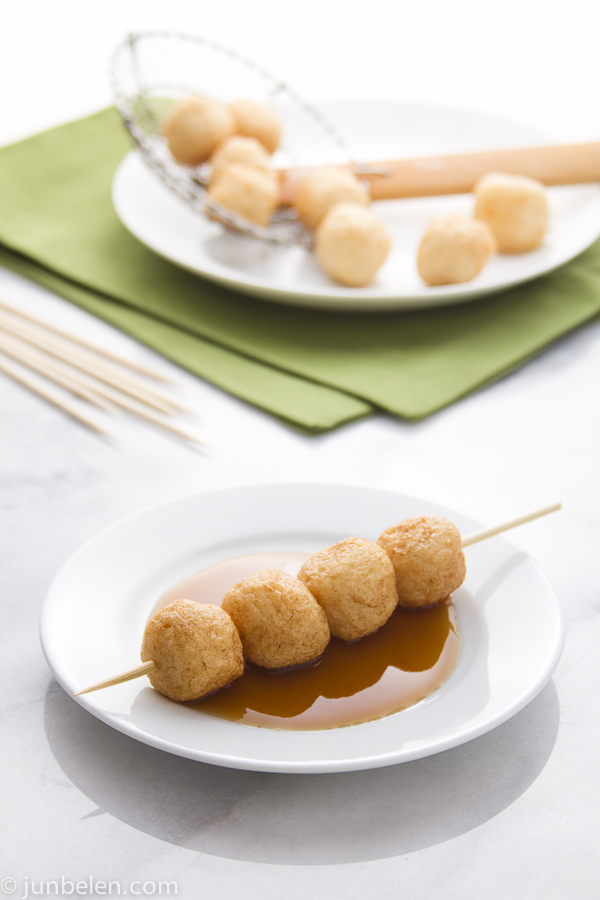