When I was little, the old Magnolia Ice Cream House along Aurora Boulevard was, without a doubt, the happiest place on earth. No other place to my mind came close.

The ice cream shop, which sat on a sprawling, green lawn next door to a concrete building that housed the plant where the ice cream was made, was where my family went to celebrate milestones. It was where we went for birthdays and graduations, where we went when my dad got a raise, when my sister got her first car — a pale yellow, second hand, four-door Toyota Starlet. We packed ourselves like sardines in the tiny sedan and drove to the ice cream shop to celebrate. Our family wasn’t well-off and so the trips to Magnolia Ice Cream House were far and few between, which made every visit and every sundae fondly memorable.

I remember stepping inside the air conditioned parlor and freezing because it was too cold. It was an excuse to wear my knitted cardigan, which I rarely wore. The shop was always bustling. The waiters wore starched blue and white shirts and dished out scoops right and left behind a long, marbled counter with stools that spun freely. I remember poring over the menu of sundaes and parfaits, wishing I had the appetite to try them all. I was always riddled with indecision but always chose Ernie and Bert, the ice cream shop’s homage to my favorite Sesame Street duo. I grew up glued to that popular American television show and didn’t miss a single show. Ernie and Bert was a sundae made of two big scoops of ice cream — one vanilla and the other chocolate, as far as I can remember — decked out with maraschino cherries and marshmallows that made to look like their eyes and their noses. The scoops were drizzled with chocolate sauce and topped with upside down cake cones that looked like festive birthday hats.

But Magnolia ice cream, be it a simple scoop or a towering parfait, was not complete without flaky barquillos. Barquillos [bahr-kil-yos] are thin, crisp wafer rolls made from flour, milk and sugar, similar to the Spanish pastry with the same name. Barquillos is made in a barquillera, a hot iron press similar to a waffle maker without the characteristic waffle patterns. The thin batter is poured onto the barquillera, pressed and baked like a very thin pancake then, while still hot, quickly rolled using a metal implement into a thin, crisp roll. At times, the hollow rolls are filled with the same crumbly mixture of toasted flour, powdered milk, sugar, and melted butter used in making polvoron. Iloilo in the Visayas is particularly known for its barquillos.

When I was little, I made believe the wafer rolls were miniature telescopes and also cigars. I held a roll in between my index and middle fingers and pretended to smoke it the same way my dad smoked. After a puff I would take a bite and let it crumble into flakes and melt in my mouth. The thin rolls are so fragile. I like to break them gingerly with my hand and sprinkle the flakes all over my ice cream, adding to it a crisp texture. To me, barquillos and sorbetes are inseparable. The pair reminds me of that old ice cream shop and that time when happiness was all about life’s simple pleasures. 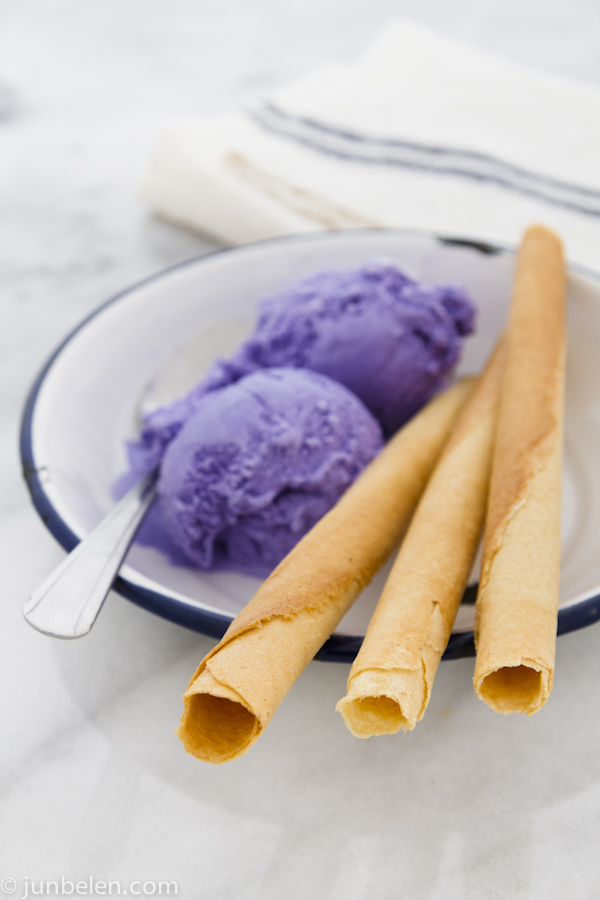