How to Make Beef and Chorizo Empanadas

If you knew me when I was ten and offered me an empanada for merienda, the kind that’s deep-fried and stuffed with savory ground beef and sweet raisins, I probably wouldn’t eat it.   If it were a slice of pineapple upside down cake, a Bavarian Crème doughnut, or even a simple hot pan de sal slathered with butter and sprinkled with sugar, then it would be an entirely different story.  I’ve always had an insatiable sweet tooth since I was a kid and I would never turn my back on anything sweet.  But whenever my mom brought home empanadas for everyone, I would split mine open, laboriously pick out and eat the raisins, and leave everything untouched.

But as I got older, I became more and more fond of the empanada — deep-fried turnovers stuffed with beef, sometimes chicken.  It’s a popular, portable merienda, or mid-day snack, in the Philippines and throughout Latin America.   Here in San Francisco, El Porteño’s buttery Argentinian carne empanadas filled with Prather Ranch ground beef, raisins and olives closely resemble the ones I grew up with.  Another favorite is Chile Lindo’s Chilean empanadas that come stuffed with an egg, which is very similar to Vigan empanadas from the northern part of the Philippines.

Empanadas make perfect hors d’oeuvres.  I made beef and chorizo empanaditas using a recipe I adapted from Amy Besa’s and Romy Dorotan’s Memories of Philippine Kitchens.  These empanadas are baked and not deep-fried. Chicken, duck, shrimp or crab can be used instead of beef and chorizo.  Sweet empanadas filled with fruits, nuts, and dulce de leche are a brilliant variation.  Too brilliant, if I may say so.  Now, that’s my sweet tooth kicking in.

For the filling, makes up to 36 4-inch empanadas

For the dough, makes one 9-inch pie crust equivalent to 10 to 12 4-inch empanadas 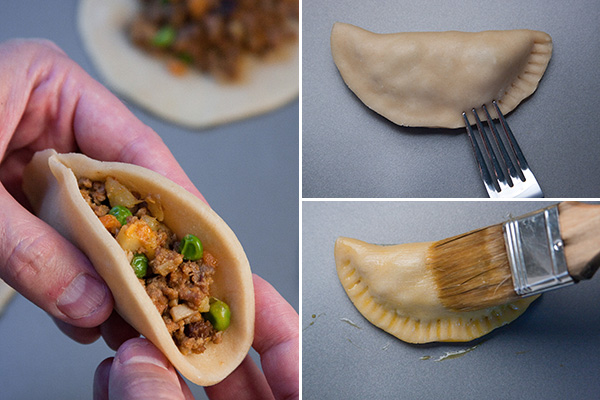 Pinch off a small handful of dough.  If it does not hold together, sprinkle the dough with ice water. Blend the water gently into the dough until it just holds together.

Place the dough out onto a clean lightly floured work surface and pat it into a disk about half an inch thick.  Wrap the disk in plastic wrap and refrigerate until form, at least an hour or up to two days.

Preheat the oven to 375 degrees.

In a large pan over medium heat, heat the oil. Sautee the onions and carrots until the vegetables have softened, about 5 minutes.

Take one disc of the dough from the refrigerator and place it on a clean lightly floured work surface.  Roll out the dough to about 1/8-inch thick.  Using a 4-inch round cookie cutter, cut the dough into circles, saving the scraps. Gather the scraps and roll them again.  Using a spatula or your hand, gently transfer the cut dough to a baking sheet lined with parchment paper.  Ten to twelve 4-inch circles can be cut from one disc of dough.

The dough can be rolled out and cut into circles ahead of time.  Just wrap them tightly in plastic wrap and refrigerate up to a day ahead.

In a small bowl, whisk together the egg yolks and milk. Brush the tops of each emapanada with the egg wash. Bake them until they are golden brown, about 25 minutes. Let them cool slightly before serving them warm. 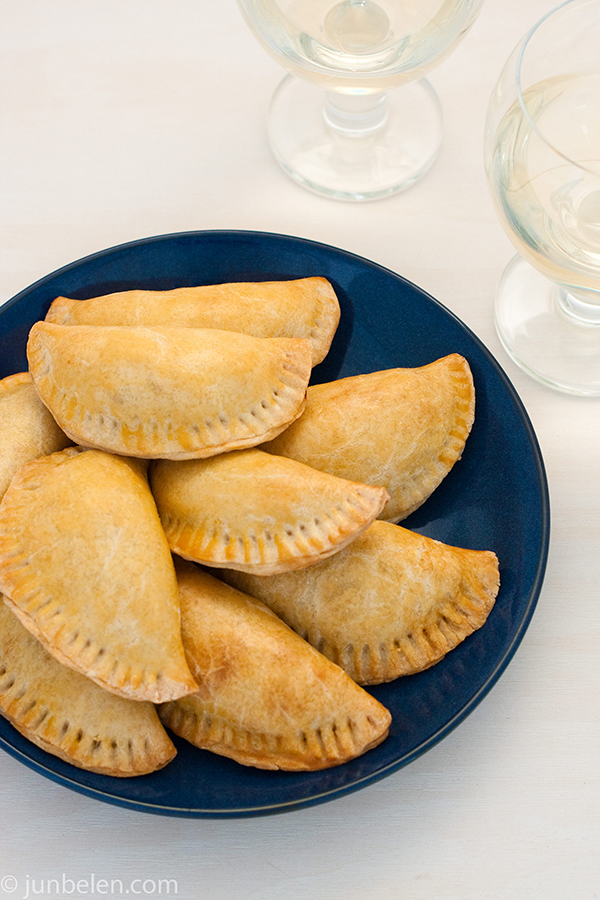 2. The original recipe calls for Russet potatoes but I like Yukon Gold potatoes. The recipe also calls for diced shiitake mushrooms.

3. Use the amount of soy sauce, rice wine, rice vinegar, and salt as a guide but feel free to add more or use less. I adapted this recipe from Amy Besa’s and Romy Dorotan’s Memories of Philippine Kitchens. The original recipe, as written in their book, seriously lacked flavor. The recipe called for three tablespoons of soy sauce and three tablespoons of rice wine and made no mention of salt, which I found too stingy.

4. The leaner the beef, the drier the filling. I recommend using 80% lean ground beef for a moist, more flavorful filling. If the filling becomes a bit dry, I suggest adding about two tablespoons of butter when adding the green peas toward the end.

5. Shredded chicken, a mixture of both dark and white meat, can be used as a substitute for ground beef. Other proteins that can be used instead are duck, shrimp and crab.