The soft, sticky dumpling plunged into the pot of fiercely boiling water. I heard a dull plop.  A small splash. I dropped another.  And a third.  Then I waited.  I waited with bated breath.

I waited for the dumplings to rise to the top, which meant they were done. In Filipino, litaw [lee-tou] means to rise. To emerge. To appear. To be seen again. Palitaw [pah-lee-tou] is a sweet rice dumpling that does precisely that — it rises to the surface once it is cooked.  Palitaw is made from galapong [gah-lah-pong], which is the dough made from sticky rice that is soaked in water overnight and then milled in a traditional, heavy stone grinder called gilingan.  It is the same sticky rice dough used to make bibingka and bilo-bilo for ginataan. The home cook’s version of galapong is made simply by combining glutinous rice flour and water and then kneading it until it becomes a smooth dough.

Palitaw is another popular kakanin or Filipino rice treat that one can find in public markets and churchyards back home. These chewy dumplings are sometimes wrapped in plastic in flimsy foam trays or neatly arranged in wide, shallow bamboo baskets lined with banana leaves next to other native rice cakes like suman, biko, puto and kutsinta.

It took a couple of minutes for the dumplings to float to the top. Minutes that seemed impossibly long. The playful bubbles made the dumplings tumble up and down. With my wire mesh skimmer, I gingerly fished them one by one.  I let them drain for a moment and then rolled them quickly in grated coconut.  I lavished each one with sugar and the fragrant sesame seeds I had just toasted in my iron skillet.

I picked up a piece with my fingers and took a bite.  Soft, chewy dumplings with the delightful texture of coconut and the rich nutty flavor of toasted sesame seeds. I licked my fingers clean of the sugary grit and reached out for another. Truly one-of-a-kind. Truly tastes like home.

Knead the rice flour and water in a mixing bowl to make a smooth dough that holds together and separates cleanly from the bowl. With floured hands, pinch off about 1-1/2 tablespoons of the dough, roll into a ball and flatten into a patty, about 2 to 3 inches in diameter and about 1/4 inch thick. Set aside on a dry plate. Repeat with the rest of the dough.

Place grated coconut in a bowl. Mix sugar and toasted sesame seeds in a separate bowl.

Bring 2 quarts of water to a boil in a pot. Drop the dumplings into the pot and boil until they rise and float to the top, about 1 to 3 minutes. Scoop them out with a wire mesh skimmer and drain.

Roll the dumplings in coconut and then sprinkle generously with sugar and toasted sesame seeds.

Serve warm or at room temperature.

1. When using frozen grated coconut, thaw it completely and drain the excess water either by pressing with your hands or using a fine mesh strainer. Spread coconut over a baking pan and lightly toast it at 350 degrees F for about five minutes.

2. How to toast sesame seeds. Place sesame seeds on a small pan or skillet that is dry and oil-free. Shake the pan so seeds evenly spread to a thin layer. Toast the seeds over medium heat, shaking the pan or stirring the seeds with a wooden spoon often. Toast until seeds are fragrant and they turn light caramel in color, about a few minutes. Immediately place the toasted seeds to a plate and let them cool. Do not leave them in the hot skillet where they will burn.

3. Drop one to three dumplings at a time so that they do not stick with each other and crowd the pot. 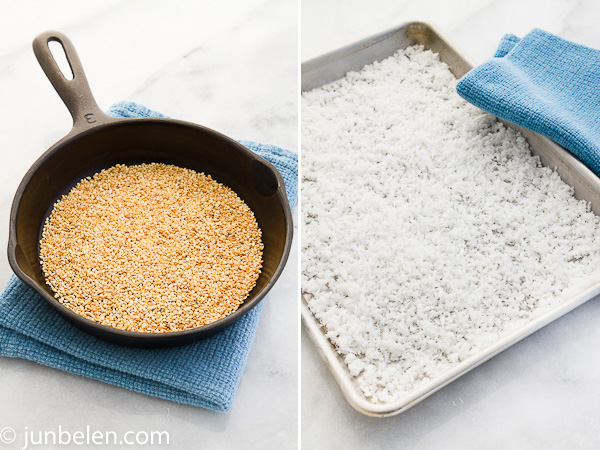 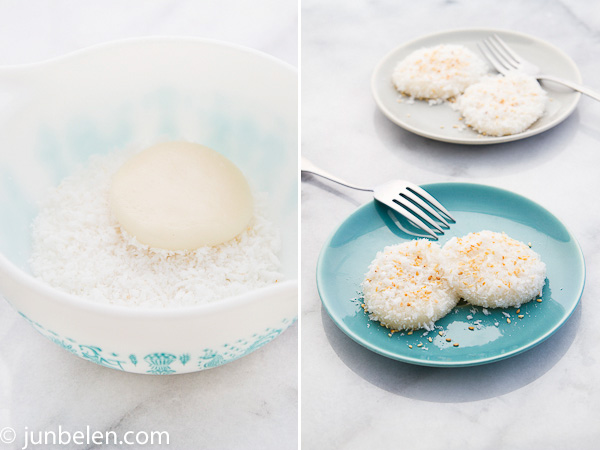 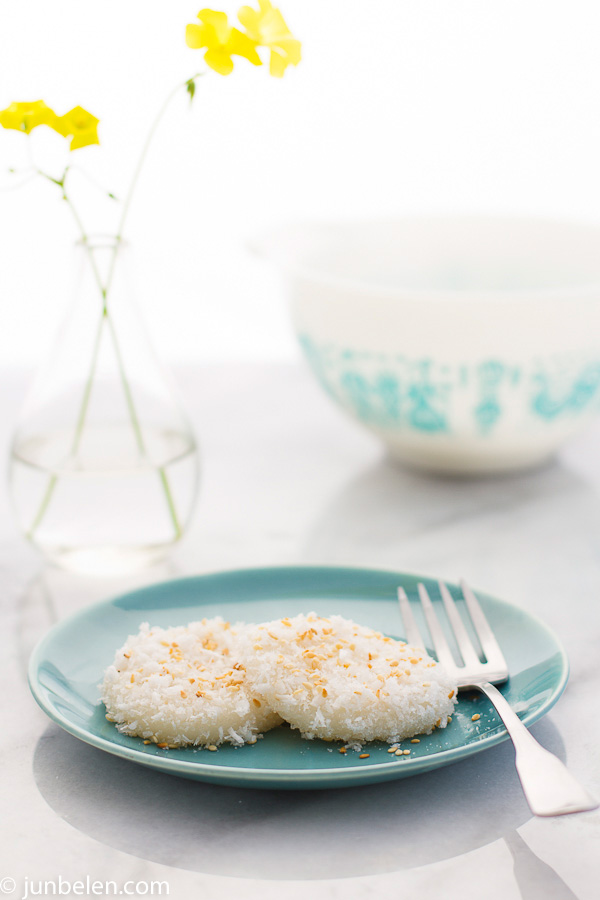